On March 18 (2020), the Malaysian government implemented the MCO or the movement control order that restricted the movement of people during the COVID pandemic in the country. At first, the MCO was in effect until April 14 (2020), but due to a surge in COVID cases, it was extended to April 30 (2020). PDRM (Royal Malaysia Police) was responsible for ensuring MCO across various states of the country.

The restrictions implemented under the MCO by the authorities are as follows:

Various roadblocks around the country were installed during this period. All inter-state and cross-border bus services were suspended as people were only allowed to travel for essential reasons.

On April 10 (2020), the Malaysian government permitted only selected businesses to operate to ensure stability in the country’s economy. Social distancing measures were also implemented across the country, and people could only travel for essential reasons like health, funeral, food purchase, etc. From April 1, the food markets and supermarkets were allowed to open from 8 AM to 8 PM.

The MCO guidelines changed for some states in Malaysia. For example, in Sarawak, food services and supermarkets were allowed to operate from 7 AM to 7 PM. This decision was taken due to the early daylight time experienced in West Malaysia. On May 1 (2020), the MCO was replaced by CMCO.

What were the guidelines under CMCO?

The implementation of CMCO was to be decided by the respective state authorities in Malaysia. Various states like Kedah, Kelantan, Pahang, Sabah, etc., opted not to implement CMCO due to the COVID pandemic. On June 10 (2020), the CMCO was converted into RMCO based on the COVID scenario in the country during that period.

What were the guidelines under RMCO?

Nationwide RMCO (Recovery Movement Control Order) was implemented from June 9 to December 31 (2020). Not all states implemented RMCO immediately, as some were still under EMCO or CMCO. The decision to implement RMCO state-wise was left to the respective state authorities based on the number of COVID cases in the state. RMCO focused on reviving various sectors of the economy that were shut due to the COVID pandemic. The guidelines issued by the government under RMCO are as follows:

From October 14 (2020), certain parts of Malaysia, like Kuala Lumpur, were placed under the CMCO again. The decision to revoke CMCO in certain regions was taken due to the third wave of COVID pandemic in the country. In January and February (2021), MCO 2.0 was implemented in various states like Malacca, Johor, Penang, Selangor, etc. MCO 2.0 was introduced due to the sudden rise in the number of active COVID cases. Unrestricted inter-state bus travel resumed on December 7 (2020) but only for areas that recovered from the pandemic.

EMCO (Enhanced Movement Control Order) was implemented in only a few areas from March 27 (2020) based on the number of active COVID cases. The government of Malaysia had identified COVID hotspots to implement EMCO for a short period in those areas. It is the strictest movement control order in Malaysia. The guidelines followed under EMCO are as follows:

Some areas were also under SEMCO (Semi Enhanced Movement Control Order) that restricted the movement of people and transportation services.

MCO has been extended to last until the number of covid cases fall below 4000 per day. EMCO has been implemented in some parts as well.

During this lockdown, various guidelines have been issued by the government to curb the spread of coronavirus. With regards to bus travel, it is allowed at 50% capacity, provided all SOPs are followed.

How to travel safely in Malaysia?

Buses are the most accessible and safe way to travel to different locations in Malaysia. Booking bus tickets online is the best way to avoid the crowd at physical ticket booking counters. 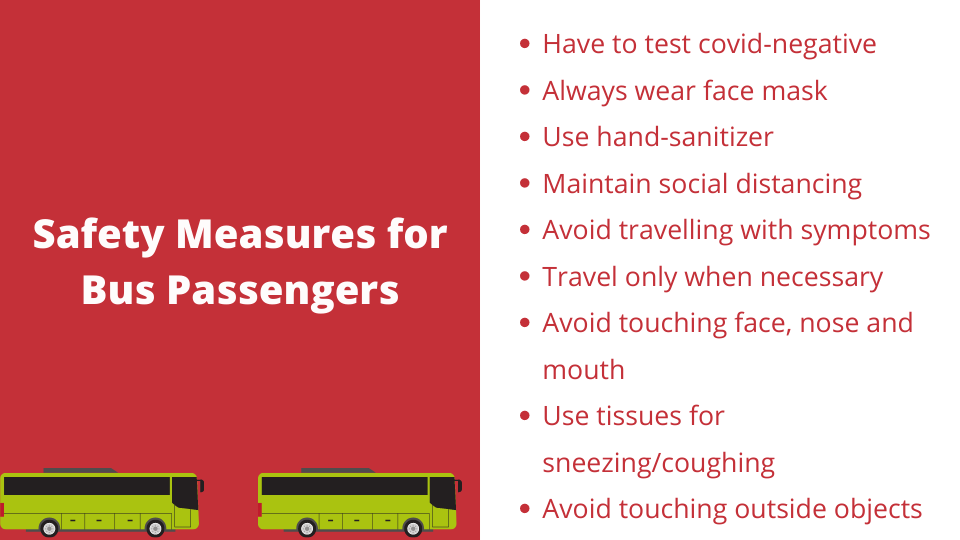 One should always book bus tickets with an operator that ensures passenger safety during the Malaysia MCO. When you book online bus tickets with a reliable bus booking site, you can see the list of precautions taken by the different bus operators against the virus. Passenger guidelines like wearing a mask, maintain hand hygiene, etc., should also be followed by travellers. If you are experiencing any COVID-related symptoms, then rush to the nearest hospital and avoid travelling by bus.

Q: Is a bus safe to travel during the pandemic?
A: The bus operators in Malaysia follow various safety protocols against the COVID pandemic like sanitisation of buses, offering e-ticket, temperature checks, etc. One should refer to the operator guidelines regarding the COVID pandemic before online bus booking to travel safely. The government of Malaysia has also ensured to provide a safe travel environment to commuters during the MCO period.
Q: What would happen if I breach the MCO guidelines/protocols?
A: You may be subjected to a fine and can also be jailed for breaching the MCO protocols. The MCO guidelines are implemented to protect citizens from the COVID pandemic, and by not following the order, one will put everyone around them in danger.
Q: What is the best way to maintain social distancing during MCO in Malaysia?
A: It is advised to stay 6 feet away from one another to be safe from the coronavirus. Online bus booking is the best way to avoid the crowd and queues while searching for public transport. One should carry their amenities like charger, water bottle, etc., while travelling so that human contact could be reduced.
Top